skip to main | skip to sidebar

The self-importance of being Ernst 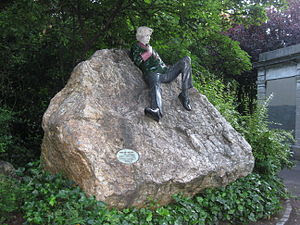 Some may know Oscar Wilde's play The Importance of Being Earnest from which I've modeled the title of this blog entry.  The play is a farce where obligations are shirked by assuming false identities.  There is no discussion of false identities in this blog but there is a false presentation of objective science on the part of Dr. Edzard Ernst as Wilde writes in Act 1

In July the International Journal of Clinical Practice published a paper by Dr. Ernst titled: "Deaths after chiropractic: a review of published cases."  When I read the paper I noticed some obvious errors.  As opposed to some so-called science bloggers, rather than blog about it, I scienced.  (I read once where a scientist said that one should use science as a verb, one sciences.)
I understand that Web 2.0 allows anyone to be a critic and possibly have great influence on public opinion (gee I am writing a blog about this).  However, one of the fundamental differences between the scientific endeavor and other domains of thought is that knowledge progresses though the publishing of ones findings in a public forum after peer review and then subject to the possibility of letters to the editor which help clarify or critique or add information to that publication.  When one submits a letter to the editor they are peer reviewed, as were the original manuscripts, and if one is using a bibliographic database such as PubMed the letters to the editor are hyperlinked to the record for the original manuscript so that people can find these important commentaries.

Here is a link to our letter to the editor on PubMed's web site.  Copyright issues prevents me from providing the letter to my readers.  We initially wrote a much longer letter but were informed after submission that the journal's maximum size is 500 words for a letter.  I will provide the added detail in this blog.
The paper the letter is in regard to is: Ernst E. Deaths after chiropractic: a review of published cases. Int J Clin Pract. 2010 Jul;64(8):1162-5.  In this paper Ernst's purpose was


In this review, I aimed to provide the basis for such a discussion by summarising all fatalities which occurred after chiropractic spinal manipulation and were published in the medical literature.

In the results section of the paper he has a paragraph that is, to say the least, very interesting when one thinks of the purpose.   Herein he describes "the testimony of the chiropractor Preston Long for a court in Connecticut recently listed the family names of nine victims."  Ernst cites this with: "Presentation by Dr Preston Long DC to State of Connecticut. Connecticut State Board of Chiropractic Examiners. Hartford Connecticut.
25 October 2009.  There was never a hearing before the State Board of Chiropractic Examiners on October 25, 2009.  The hearing was in January of 2010 and because Long did not appear to under oath attest to his pre-submitted testimony it was, in accord with the procedural rules in CT not accepted and thus not part of the public record.  One wonders how does Ernst get this document when it was not public.  I have a copy as I was on the witness list and these pre-submitted testimony documents I was told were not to be made public until the board hearing.


Anyone wishing to see the hearing where Long's testimony is discussed should go to the CT-N web site here.
In that same paragraph Ernst cites nine deaths from chiropractic  spinal manipulation that he found on a web site.  When I read Ernst's paper one name stood out in my mind, Kimberly Lee Strohecker.  I know a fair bit about Ms. Strohecker's very unfortunate death.  I wrote about it in a 2004 ethics article titled J'Accuse...! (I Accuse).  This article is about the death of Ms. Strohecker after a chiropractor got her to stop taking her anti-seizure medication.  At least the federal court barred the chiropractor from ever practicing chiropractic again along with prison and a fine.

Now some reading this will say - gee that's picky.  Well the point is ones method must fit ones stated purpose.  Now if he had said in the discussion that there may be many more deaths after chiropractic spinal manipulation that aren't reported in the scientific literature and then cited these he would have at least stood on safer ground.  Still 5/9 cases he said were after chiropractic spinal manipulation weren't.  As we noted in our letter to the editor: "When obvious facts are wrong, the veracity of other facts, not as easily verified, must come into question."  Science works in part because we have to have faith that what people write in their papers is in fact the truth.  It is not truthful to say 9 people died when only 4 did.  Thus can we trust the rest of what Ernst tells us?

Also Ernst cites an event that never occurred, Long's non-testimony before the CT Chiropractic Board.  So again he cites something that is obviously not true.  Thus can we trust the rest of what Ernst tells us?  Some might say it is an honest error which if he was a newbie to scientific publishing I'd say give him a pass but I just did a PubMed search for Ernst E and found 1426 papers.  I don't think he can claim to be a newbie.

Ernst cites a paper by Dziewas et al as presenting another case of a person who died after chiropractic spinal manipulation.  However, one of the great features of modern electronic bibliographic searching technologies, such as  PubMed, which Ernst used, is that letters to the editor also are found with the citation for every paper.  When searching PubMed for Dziewas one finds a letter to the editor by Wenban.  Wenban reported that the treatment was not provided by a chiropractor and thus cannot be chiropractic spinal manipulation.  Wenban has detailed the commonality of wrongly ascribing adverse events of manipulation to the care of doctor’s of chiropractic.
A couple of the letters to the editor note that Ernst missed in his discussion the study by Cassidy et al that investigated the association between stroke and seeking care of a chiropractic physician or a medical physician and found no excess risk for seeking care with a chiropractic physician.  I've blogged about this previously.   In Ernst's reply he says about Cassidy's study "it has been repeatedly criticised for being seriously, perhaps even fatally, flawed e.g. (8). The ‘inconvenient truth’ might thus turn out to be a 'convenient untruth’."  A long time ago I read an article that talked about somethings one can do to simply determine the validity of a paper one reads.  One of those is references.  Above Ernst says Cassidy's study has been repeatedly criticized for being flawed.  The key word is repeatedly.  This obviously repeatedly means more than once, which means that there must be more than one reference cited for that criticism.  In fact, I think most would agree that repeatedly probably means many more than one.  Well there is only one reference cited and what is that: Ernst E. Vascular accidents after chiropractic spinal manipulation: myth or reality? Perfusion 2010; 23: 73–4.

No it can't be the only criticism in the scientific literature (not the blogosphere mind you - this is science we are talking about here) that Ernst can find is his own (now you get the idea about the title for the blog).  Anyway, you mean to tell me that none of the critics of this study had the testicular fortitude to write a letter to the editor?  Cassidy's study was published in Spine and was part of the WHO's Bone and Joint Decade's Cervical Spine Task Force reports.  Well OK Ernst didn't see fit to write his critique in the journal it was published in, as my colleagues and I did about Ernst's paper.  You know those newbies to scientific publishing don't know that you should submit critiques to the journal it was written in.  Well you remember those 1426 citations to Ernst in PubMed just 204 are letters to the editor.  OK but let's look at his cited critique.

Don't search too hard for this in PubMed.  It's not there. The journal name is wrong.  I know newbies sometimes get their citations wrong especially when they don't know the journal too well.  Here is the proper citation.

What do I know about Verlag Perfusion GmbH.  If you look at their web site you'll see it is a German publication and the first editor listed is...Ernst.  So I guess he's unfamiliar with the proper name for the journal.
Now to his critique.  I won't reproduce it here but instead suggest listening to Cassidy answer these questions as they were posed to him before the CT Chiropractic Board you can see his testimony here.
Ernst in his paper on deaths after chiropractic spinal manipulation also says that there is no benefit to spinal manipulation.  What's his reference for that.  You guessed it, his own narrative review.  Thus he ignores a growing body of systematic reviews showing benefit to spinal manipulation (1- 9)


It is essential that Cochrane reviews be undertaken by more than one person. This ensures that tasks such as selection of studies for eligibility and data extraction can be performed by at least two people independently, increasing the likelihood that errors are detected. If more than one team expresses an interest in undertaking a review on the same topic, it is likely that a CRG will encourage them to work together.

Well the self-importance of being Ernst is that he's the only expert whose opinion counts to Ernst.

Perles of Wisdom by Stephen M. Perle, DC, MS is licensed under a Creative Commons Attribution-NonCommercial-ShareAlike 3.0 Unported License.
Based on a work at smperle.blogspot.com.