skip to main | skip to sidebar

A friend recently sent me an email from the Foundation for Vertebral Subluxation (FVS). They say that they are: "Dedicated to the Founding Principles & Tenets of the Chiropractic Profession"

This is an attempt to revise the history of chiropractic to suggest that there was stagnate set of principles the some people today are trying to change. The founder of chiropractic, D.D. Palmer changed his theory about what chiropractic was three times over the seven years he wrote about chiropractic. (1) Some outside chiropractic like to point out that D.D. wasn't an M.D. or university educated. This is absolutely true, however, the evidence is clear that D.D. was well read and up-to-date when it comes to medical knowledge of his day. (2, 3)

If D.D. could change his theory three times then why on earth would the chiropractic profession want to pick one of D.D.'s or his son's theories and etch them in stone? That is dogma that has no place in modern health care or modern chiropractic.

Given that D.D. was "in to" the literature, (3) I am comfortable with saying I am a loyal chiropractor and will not bow to one of those four theories of chiropractic D.D. had. Today's chiropractor has the duty to follow in DD's footsteps and rethink chiropractic as the science dictates. I know that some sell to their patients that they do chiropractic as it was done in the past and actually get some people to think that practicing chiropractic as they think it was practiced 50 or 100 years ago is better than making appropriate changes when the scientific evidence suggests that there is a better way.

I'm sure expressed this way, that most people would say, "gee do I really want to go to a chiropractor whose methods are from the early 20th century?" I think not. I mean who would go to any professional and say, "please do not be up-to-date"?

The Foundation for Vertebral Subluxation wants to preserve a term, subluxation, that D.D. didn't use until after the trial of Shegatoro Morikubo for practicing medicine, surgery and osteopathy without a license in LaCrosse WI.(4) Subluxation and innate intelligence were first used by Smith et al in the first textbook on chiropractic Modernized Chiropractic .(5)

Many in chiropractic never learned the origin of the pseudo-religion or chiropractic philosophy. (6, 7, 8). It was nothing more than a legal tactic used in Morikubo's case. After Tom Morris, Morikubo's attorney got the medicine and surgery charges dropped, the tactic was to say that chiropractic and osteopathy had different philosophies and therefore Morikubo wasn't practicing osteopathy. In some ways it is unfortunate, because this was successful and then BJ etched into stone "chiropractic philosophy". (4)

I love the photo below. it is of BJ Palmer's rehab facility at the Palmer School of Chiropractic c1945. (BJ's signature is on each of the rugs) 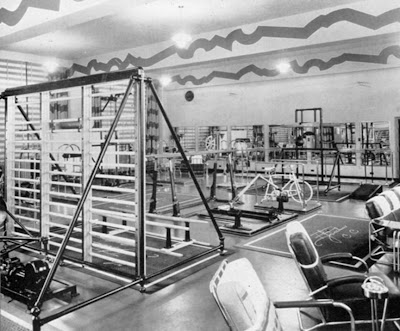 What this shows is that even BJ Palmer wasn't so pure and straight as he "mixed" using rehab. The FVS wants to live today in a chiropractic past that did not actually exist. Their revised chiropractic history is a pseudo-religion that has no place in today's chiropractic beyond a class in the history of the profession. It is about as relevant to dealing with the needs of today's patient as sulfa drugs and mercury are for the medical profession.

Perles of Wisdom by Stephen M. Perle, DC, MS is licensed under a Creative Commons Attribution-NonCommercial-ShareAlike 3.0 Unported License.
Based on a work at smperle.blogspot.com.